This is a ray traced image created with POV-Ray Version 2.2. I used a utility that I wrote myself, uninspiringly called GEODOME (V1.1), to create a geodesic dome out of black metal pipes and joints. Inside this, there is a blue metallic sphere with some interesting lightning arcing around it. 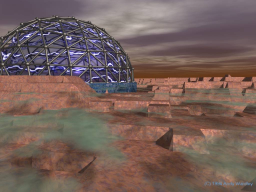 Click on the image above to see a larger version.

The lanscape consists of stone blocks, walkways and ramps created from a height map. The image used as the height map started out as a fractal plasma cloud in 256 shades of grey. I repeatedly saved it as a JPEG image using the highest compression and lowest quality settings. The ramping you see is a visible artifact of the JPEG compression algorithm.

The complexity of the geodome certainly contributed to the length of time to trace, but the main factor was the big fat area light I used (appreciate the smooth shadows) coupled with the complexity of the ground and fog textures (lots of transparent, bumpy and layered bits).